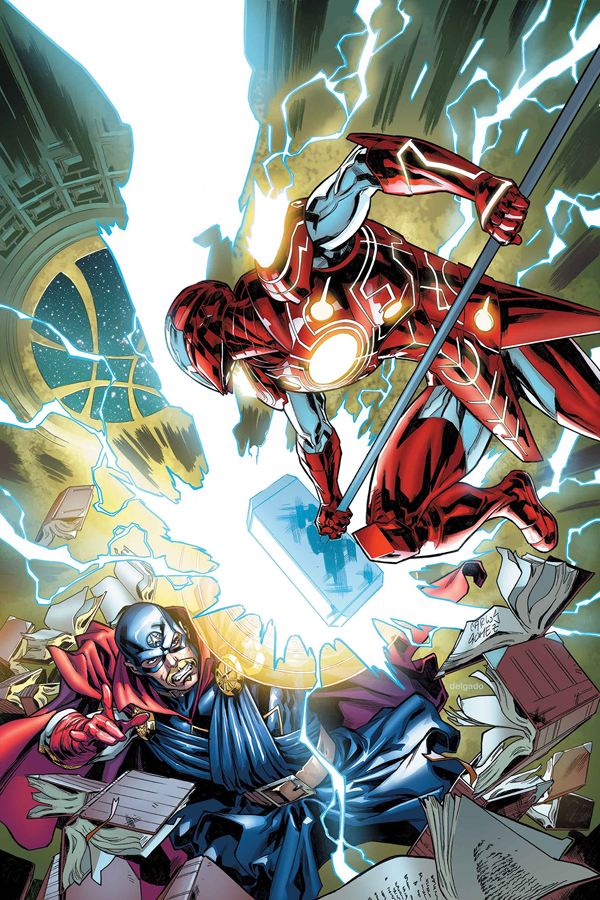 When Gamora used the power of the Infinity Gauntlet to fold various corners of the Marvel Multiverse in on itself, she created fusions of various characters. From Captain America and Doctor Strange came Soldier Supreme, from X-23 and Scarlet Witch came Weapon Hex, from Black Panther and Ghost Rider came Ghost Panther, from Spider-Man and Moon Knight came Arachknight, and from Iron Man and Thor came Iron Hammer!

As the villains of Warp World trade foes, it begins a rift between Soldier Supreme and Iron Hammer that could tear the super hero community in half! But could this criminal conspiracy be the portent of a much bigger cosmic calamity?

Plus: A bonus tale of Soldier Supreme versus Baroness Umar for the fate of our nation!

Weapon Hex and Speed Weasel join the fight for Warp World as the forces of Hell invade the streets of New York City!

Plus: A bonus tale of the spellbound sisters taking down a ferocious furry femme!

The stunt-riding cursed king of Wakanda, the Ghost Panther, heads to the far future… in the year 2099! Can he rally the inheritors of the legacy of his fellow heroes to defeat the Martian invaders?

Plus: A bonus tale of T’Challa taking on creatures of the night alongside Knightblade!

The web-spinning Arachknight finds himself out of the depth of all four of his personas as his own warped universe begins colliding with another – the New Supreme Universe, homes of the Supreme Seven!

Plus: A bonus tale of ol’ AK trying to persuade the Terrific Two to become a Trio!

Whatever has been causing worlds to smash together is out of control… and starts smashing Warp Worlds heroes into one another! As the heroes begin turning into strange new amalgamations, can even Ghost Hammer turn things back to normal?

Plus: A bonus tale of Sigurd Stark battling the twin wolves of addiction and Fenris the god devourer!